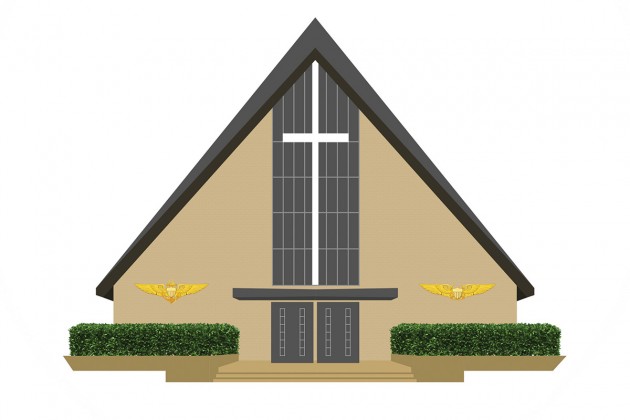 Rendering showing new wings for the Chapel of the High-Speed Pass, part of the POW-MIA Memorial at Cecil Field.

Jacksonville City Council took unanimous action May 22 to rename a local road the POW-MIA Memorial Parkway in honor of former prisoners of war and the more than 82,000 servicemen and women still considered missing in action.

New World Avenue, which runs from Cecil Field north to Normandy Boulevard, will soon see new signage, which will include something typically prohibited by the government – a hyphen. City Council waived a 15-year-old ordinance which requires street name changes not include hyphenation. Ordinance Code, Section 745.105 (g) states “A proposed street name shall not exceed 30 characters in length, including directional and street type information, and shall not include special characters, hyphenation or abbreviations.”

The request for the name change was initiated earlier in the year by the Cecil Field POW-MIA Memorial, Inc., a nonprofit which has recently taken on the task of renovating and expanding the memorial. The site is a national park located on 26 acres in Northeast Florida at the former Naval Air Station Cecil Field Master Jet Base and now known as Cecil Commerce Center. The shrine was dedicated in 1973 by the families of POW-MIA pilots and servicemembers lost in the Vietnam and Desert Storm conflicts.

Renovations include restoration of the Chapel of the High-Speed Pass, a mid-century modern building. A new roof was put on, interior electrical work completed, and painting is underway. Angel Corrales, manager of American Window Preservation LLC, was selected to refinish four doors on the chapel and reseal two of the 26 windows on the sides of the chapel. Corrales, who grew up in Riverside, has been active in window preservation projects for many historic properties in the Riverside Avondale area.

“We saw Angel’s passion right away and knew he was the right guy for the project,” said Michael Cassata, executive director. The nonprofit thought it would have to replace the windows and had received a bid of $50,000 just for the 40-plus windows in the gable. “Angel recommended we keep the original windows, so we’re excited about that,” said Cassata.

Dedication of the wings and a road renaming ceremony will be held on the steps of the chapel Tuesday, July 10, at 9 a.m.

The chapel at Cecil Commerce Center was originally dedicated in 1963, serving NAS Cecil Field, and serves as a focal point of the nonprofit’s plans to create a place of education, respite and reflection on the sacrifices of POWs and MIAs.

In addition to donations, Cecil Field POW-MIA Memorial, Inc. is offering opportunities to purchase pews for the chapel, as well as brick pavers for the Memorial Benefactor Plaza. Details can be found at www.powmiamemorial.org.